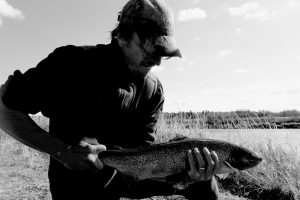 Edmund is the project lead at the Petitcodiac fish net trap at the head of tide in Salisbury, which Fort Folly Habitat Recovery operates as part of the Province of New Brunswick’s Petitcodiac River Restoration Project. He started working seasonally for FFHR in 2009 monitoring forest vegetation in permanent sample plots on the Fort Folly First Nation Reserve. In 2010 he was working on the medicine trail and its interpretive panels, as well as vegetation monitoring in Fundy National Park, and culvert surveys on the Big Salmon River. He began managing the fish net trap in 2011, the second year it was in operation, and has been the lead on that project for the 7 years it has operated since then. He became a permanent non-seasonal FFHR staff member in 2014. During that time, he has been the lead on several riparian restoration projects both in collaboration with Sentinelles Petitcodiac Riverkeeper (Humphrey’s Brook in Moncton), and an FFHR initiative (Little River). Being outside so often, he took advantage of the opportunities this offered to photograph plants encountered in the field and found time during the off season to turn that collection into a field guide, “Wildflowers of the Maritimes” published by Nimbus in Halifax.

Where are you from? I never know quite how to answer that in a satisfying way. The simple short answer is that I grew up in Missouri, at roughly the geographic centre of the United States. Life tends to be a bit more complicated than that though. It is not as if I moved directly from there to here. At this point I’ve spent more than half of my life elsewhere- not in just one other place, and I find myself the sum of experiences in many different places. I’m a dual Canadian/US citizen by virtue of my Mother who is from Ontario. I did my bachelors degree in Forestry in the US, at the University of Missouri, but did not go straight through in four years. I took longer because during my undergraduate degree I: changed schools; changed majors; studied internationally (a summer in Australia (Centre for Rainforest Studies), a summer in the Turks and Caicos (Centre for Marine Resource Management), a year in Finland (University of Joensuu); and worked a year internationally (back in Australia at the Centre for Rainforest Studies). That was where I got into Restoration Ecology. After finally graduating in 1995, I joined the Peace Corps, and spent the next 2 years in Kenya as an agroforesty extensionist working with farmers and school groups on tree planting and soil conservation projects.

I returned to North America in 1997 and lived in Ontario for a while with my grandparents on their farm north of Toronto, providing palliative care for my grandfather who was in the final stages of cancer. After his death I went west to for grad school, doing my Masters degree at the University of Alberta, spending a couple of years examining challenges involved in revegetation of sites following oil sands mining near Fort McMurray. I worked for the U of A for a year after that as a coordinator for an academic and industrial research network focused on oil sands reclamation and during that time published several papers from my master’s thesis and related research. Next, I spent a chunk of the following year in French Immersion at the Université du Québec à Chicoutimi, and most of the rest of it in the Okanogan, on the US side of the Washington / BC border doing an internship with a native plant nursery specializing in riparian restoration. While there, I became aware of the Fisheries Field Technician program offered by Vancouver Island University. Once done with my internship, I joined a session that VIU was offering in collaboration with Lake Babine First Nation, halfway between Prince George and Prince Rupert in northern BC, where I learned fish ID, electrofishing, bank stabilization techniques, and many other skills useful for my work with FFHR. Shortly after that I got a job in the US with the Park Service managing a native plant nursery at Lake Mead in Nevada. I did that for several years, and then returned to Canada with plans to start my own native plant nursery, specializing in riparian restoration (http://riparianhabitatrestoration.ca/index.html).

Those plans, and the Maritime lifestyle are what brought me to New Brunswick. This province in particular benefits from a population density that I find perfect – not too many people (compared to say southern Ontario), but not too few people (compared to interior BC). There are plenty of people to work with, and enough opportunities for projects to keep one busy. I bought a woodlot in Nackawic, and began building a house, while living there year-round off grid in a yurt. Then, plans changed. I met the woman I went on to marry, but she didn’t happen to live in Nackawic. She lives in Memramcook and works for the Canadian Wildlife Service in Sackville. Of the two of us, it made more sense for me to be the one to relocate, and I did so. Before long we had a son, and I ended up working with Fort Folly Habitat Recovery, doing pretty much exactly the kind of work I had planned. Funny where life takes you, if you let it.

Why get involved in Environmental Conservation? I prefer to not be doing the same thing every day, and for what I’m doing to be positive and meaningful work. It only took one salmon release to discover how empowering positive action like returning spawning salmon to repopulate the Petitcodiac can be- arguably even more addictive than tree planting! I find our work mentally stimulating because of its multidisciplinary nature. From proposal writing, to fieldwork, to analysis and reporting on completed projects, what we do brings together physical and biological sciences with a dash of politics and economics, all applied towards sustainable environmental management and species conservation. That and I like working outside.