The North River flows entirely within Westmorland County, New Brunswick. Its headwaters begin north of Moncton near the bases of Lutes Mountain and Indian Mountain, from which it drains from northeast to southwest, ending where it and the Anagance River come together, near the Village of Petitcodiac, to form the main stem of the Petitcodiac River.  The North River watershed covers 264.8 km2, making it the third largest tributary within the Petitcodiac River system.  Its drainage area lies almost exclusively in the Eastern Lowlands Ecoregion (New Brunswick Department of Natural Resources 2007).  The river has low gradient, dropping just 80 metres along the 49 kilometers from its headwaters near Route 126 to its confluence with the Anagance (Natural Resources Canada 1997; Natural Resources Canada 2008). From the communities of Monteagle to Second North River, the river is characterized by very low flow rates, huge log jams and grassy beaver meadows.  It is a highly convoluted, meandering river. 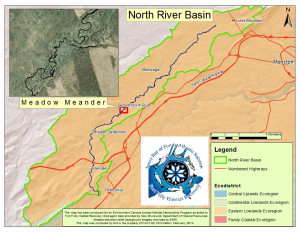 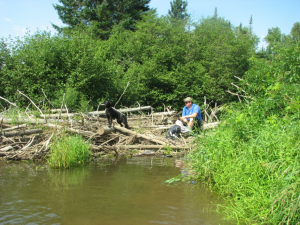