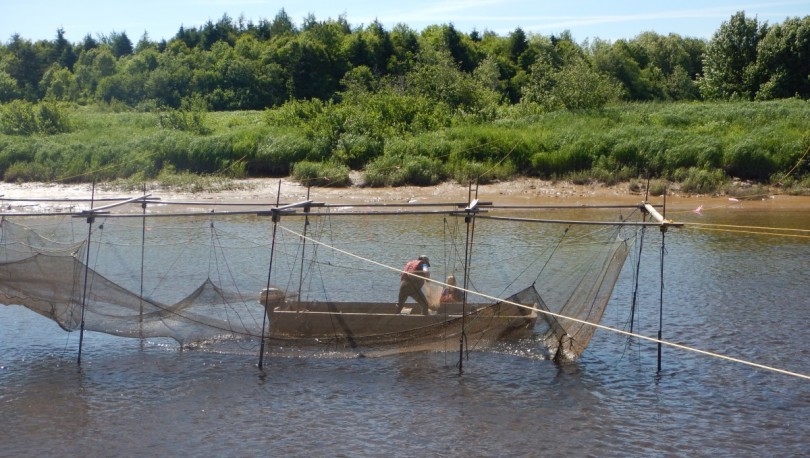 Pet-kout-koy-ek, one of the several original versions of the name now written as Petitcodiac and otherwise meaning ‘the river that bends like a bow’, is home to the native Mi’kmaw people represented today in the region by the Fort Folly First Nation.

In 1968, the Petitcodiac River causeway, a gated dam structure, was constructed between the City of Moncton and the Town of Riverview to provide a transportation link and to protect farmland above the causeway from flooding.  The installation of the causeway created a headpond on the upstream side and resulted in decreased abundance of many migratory fish species; both the American shad and Atlantic salmon were declared extirpated from this system.

In anticipation of the gates opening, the Petitcodiac Fish Recovery Coalition (PFRC) formed in order to offer support for the restoration of the Petitcodiac river and the re-establishment of native fish species. Fort Folly Habitat Recovery, as an active PFRC member, manages and operates a box net fish trap as well as fyke nets to document the baseline presence/absence and counts of individual fish species with valued in-kind contributions from other PFRC member organizations, including the Petitcodiac Watershed Alliance & the Petitcodiac Riverkeeper. Some of these species include but are not limited to: inner Bay of Fundy Atlantic salmon, American eel, American shad, striped bass, tomcod, gasperau, brown bullhead, white perch, and suckers.  The trap is located in the main channel of the Petitcodiac River just upstream of the “Salisbury Old Train Bridge”, and just below the restored head-of-tide.

On April 14, 2010, the gates of the Petitcodiac River causeway were opened to restore free tidal flow through the causeway and allow free fish passage.  Since then, the channel downstream of the causeway has widened and water volume has increased. The PFRC has endorsed various projects by member organization designed to promote and accelerate the re-establishment of native fish species; ensure the river and estuary fulfill the role of supporting habitat for the native aquatic species that have historically used the river; increase stewardship and conservation activities carried out by citizens throughout the Petitcodiac River watershed; and raise public awareness and support of all fish and fisheries restoration efforts in the Petitcodiac River. It is our hope that with continued stakeholder support that the Petitcodiac River watershed will return to its original splendour.