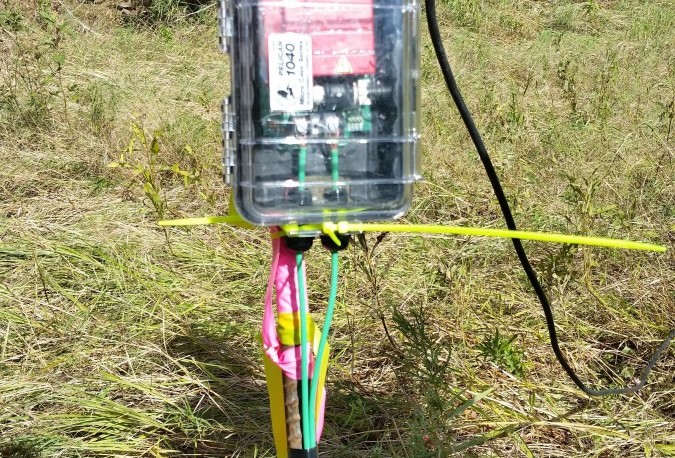 This project aims to determine key habitat and spawning success in the Petitcodiac River Watershed via passive and active telemetry monitoring of wild smolt previously captured and sheltered in a marine environment until maturity.
Monitoring activities include the construction in late summer of a primary set of antenna arrays across the Pollett River, to record the movements of approximately 800 tagged mature salmon. A secondary set of arrays will also be constructed at the mouth of the Big Salmon River to monitor straying releases from the Petitcodiac River, as well as the Upper Salmon and Point Wolfe Rivers where similar projects are underway. Additionally, a small subset of approximately 20 fish will be radio tagged and actively monitored in late fall using a handheld receiver to better identify preferred spawning areas and migration. These activities will provide answers to many unknowns regarding the behaviour of mature salmon when released, as well as allow for future protection and conservation enforcement of this critical spawning habitat. Information collected through this project will feed directly into the Action Plan for inner Bay of Fundy Atlantic salmon, conservation research, and fisheries management.

The Fort Folly Habitat Recovery team’s goal is to continue its important contributions towards the implementation of the iBoF Atlantic salmon Recovery Strategy and Action Plan on the Petitcodiac River as well as collaborating on similar work on three NB index rivers: the BSR, USR and PWR. All of our iBoF Atlantic salmon activities are aligned with endorsed and approved Recovery Strategy and Action Plan initiatives as supported by the National Recovery Team and developed to protect iBoF Atlantic salmon and its habitat. FFFN through the FFHR program has earned a reputation as a valuable contributor to the iBoF Atlantic salmon Recovery Team’s efforts to date and the AFSAR program is critical in maintaining its capacity for involvement. This project is needed because the current levels of Government of Canada lead and stakeholder involvement particularly that of Fort Folly Habitat Recovery, in iBoF Atlantic salmon conservation and recovery must be maintained in order to keep this species from becoming extinct.