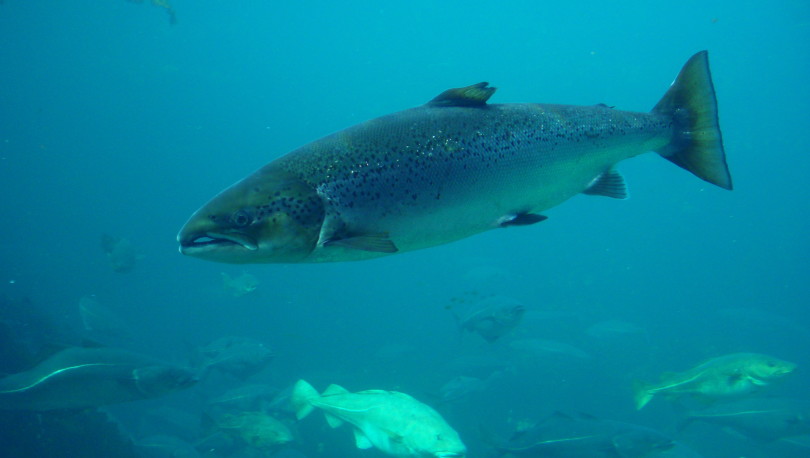 A smolt wheel, also known as a Rotary Screw Trap (RST) is designed to catch a portion of the spring time juvenile salmon who are migrating out to the sea for the first time.  Any salmon which swim into the smolt wheel are held, unharmed within its ‘live-well’ until technicians arrive to sample them.  Data such as length and weight is collected from all the salmon caught, as well as scale and tissue samples from a proportion of them.  A percentage of those fish captured from the BSR (Big Salmon River) wheel are held for transport to the Live Gene Bank (LGB) at the Mactaquac Biodiversity facility where representation of surviving iBOF Atlantic salmon families are being maintained.  In recent years, the captured salmon on the BSR are tagged with a punch hole to the mid-upper caudal fin, rather than with a streamer tag, and recycled upriver to be recaptured by the smolt wheel once again. This helps determine the percentage of the run that the smolt wheel is catching, which allows us to estimate the size of the overall run.

Also within the last couple years, the fish from the PR (Pollett River) smolt wheel are being transported to the Huntsman in St.Andrews instead of the Mactaquac hatchery, where they are quarantined for a period of time until health testing is finished (they also are no longer recycled upriver and do no require a caudal punch). When all is finalized they are transported to Blacks Cove in Grand Manan where they are grown out in sea pens for 16 to 18 months until ready for  release back into their home river.  Two smolt wheels operate from April to June, one located on the Big Salmon River in St.Martins, the other on the Pollett River in Salisbury.

Electrofishing surveys are conducted yearly on index iBOF Atlantic salmon rivers in order to monitor remnant populations and to collect brood stock for the LGB program.  These surveys are conducted with an electrofisher, which uses two major electrodes from a rod, delivering a current into the water to stun fish.  The current runs from the anode to the cathode creating a high-voltage potential.  The fish receive an uncontrolled muscular convulsion that direct them toward the person conducting the current while the rest of the crew uses a dip net to catch the fish for processing. Some of the bodies of water that are/have been electrofished in New Brunswick include but are not limited to: Petitcodiac river, Pollet river, Little river, Memramcook river, Breau creek, Dickson brook, Prosser brook; In Nova Scotia: Diligent river, Maccan river, Portapique river, Bass river.

Adult snorkeling surveys are carried out yearly in order to assess the number of returning fish to iBOF rivers.  If possible, the seining of adults is attempted in order to provide scale and tissue samples for analysis.  These surveys are conducted by technicians wearing dry suits and snorkel gear while snorkeling over main pools in the river.  Seining involves using a net which hangs in the water using weights attached to the bottom of the net, while the remainder floats on top with small buoys.  This creates a fence type structure which encircles fish, allowing technicians to capture and process them in a harmless manner.

For many years, the FFHR Team was involved with incubation basket experiments among index iBOF rivers, where fertilized eggs from the Mactaquac hatchery were being introduced into the wild at the earliest possible stage of their life. The basket itself would be submerged mostly in gravel within the river system, which was partially filled with gravel and eggs.  This allowed fish to be exposed to a more natural environment rather than being introduced later on in the river as captive-reared salmon.  The baskets were left in the river over winter to allow for natural incubation and monitoring was conducted later in the Spring.  These experiments have not been conducted since 2006.

This project was part of an overall strategy to identify marine habitat used by iBOF Atlantic salmon, an issue which represents the main knowledge gap in the current Recovery Strategy.  We know almost nothing about their marine life other than the fact that less than 1% of adults return to iBOF rivers.  Considering this, tags archived light (for latitude and longitude estimates), depth and temperature. Upon tag pop-up to the water’s surface, the information was transmitted to an Argos satellite.  Mortality of salmon would result in the premature pop up of tags.  Tagging was done on post-spawning adults either through seining, rotary screw trap or angling.  This project was conducted for several years until 2010.  Due to unpublished results, further information about this project will appear at a later date.