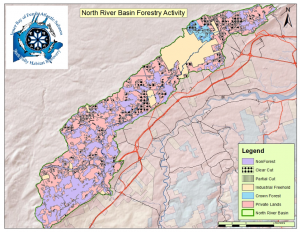 Figure 4-3: Forest tenure and management in the North River

Nonforest Land Use data obtained from the New Brunswick Department of Natural Resources shows  31.6% of the watershed is used or purposes other than forestry.  Agricultural activity dominates, covering 26.5% of the basin (Figure 4-4).  More land in the North River basin is dedicated to agriculture than in Demoiselle Creek, Pollett River and Little river combined (Department of Natural Resources in 2014). 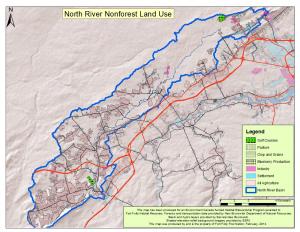 Figure 4-4: Non-forest land use in the North River watershed.

Discussions with New Brunswick’s Department of Transportation identified one culvert (WM20) over 3 feet in diameter that crosses the North River. There may be additional culverts less than 3 ft in diameter within the watershed that are the responsibility of the DoT (Figure 4-5), however, records were not available for these. If a problem culvert is identified and there is a question of whom is responsible for it (private landowner versus the DoT), GPS coordinates should be taken and responsibility confirmed through further discussions with the DoT. 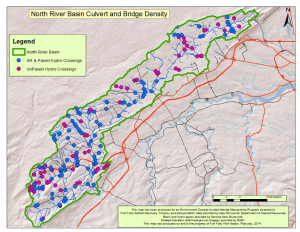 Culvert inspection reports were provided by the DoT for the aforementioned culvert. Selected information from this report is provided below. For more detailed information, contact Fort Folly Habitat Recovery at (506) 379-3401.

The culvert WM20 is located under a two lane asphalt road on Route 126 at Control Section #R0126 009-9.550 (Figure 4-6). It was last inspected on August 13, 2012. There are two structures, a CSP component and a concrete arch. Both structure conditions are designated as FAIR to POOR. The following recommendations for this culvert are as follows: 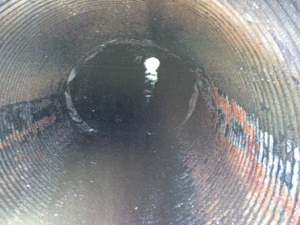 In addition, there are 11 bridges that cross the North River for which the DoT is responsible (Figure the bridges identified from the DoT maps are: N505; N510; N512; N513; N520; N523; N525; N530; N535; N540; and5301. If there are concerns with any of the identified bridges from ongoing discussions with resource users, follow up will be necessary with the DoT. Locations of these bridges and culverts have been incorporated in to a GIS layer.

In 1968, approximately 40 kilometers downstream of the North River, along the main stem of the Petitcodiac, the Moncton to Riverview Causeway was built instead of a bridge, in order to accommodate vehicular traffic between the two cities.  The fishway built into it proved to be ineffective. The causeway gates created a barrier to fish passage with significant consequences for native fish species in the river, and led to the decline in the populations of species such as alewife, blueback herring, rainbow smelt, and sea-run brook trout.  Some species disappeared altogether from the upland reaches of the Petitcodiac (such as the North), including Atlantic tomcod, American shad, and striped bass (Locke, et al. 2003).  Atlantic salmon only remained present in the river as a consequence of ongoing stocking efforts (AMEC 2005)

In April 2010 the Moncton to Riverview Causeway gates were opened as part of the Petitcodiac River restoration project.  Five years of monitoring from 2010 to 2014 following the restoration of fish passage (Redfield 2015) found American shad, striped bass, and Atlantic tomcod returning to the river. Of these, the latter two have shown sustained and progressive increases in numbers over the years, while invasive non-native smallmouth bass have declined.  Consequently it is clear from these results that the fish community of the Petitcodiac has the capacity to recover, given the right conditions, and appears to be on its way to doing so.

Based on general information provided by Service New Brunswick, two forestry operators (JD Irving as Forest Patrol and Natural Resources) may have conducted work in the North River watershed. While intended blocks of land to be treated were identified by operators that does not necessarily mean that they were treated with herbicides. Products used in these industries may contain the active ingredient glyphosate. Glyphosate is found in several formulations under the trade names Arsenal (PCP 23713), Forza (PCP 26401), Vantage (PCP 26884), Vision (PCP 19899) and Vision Max (PCP 27736). The active ingredient triclopyr has also been used in the past as Release (PCP 22093).

In addition, two industrial operators (Asplundh and NB Power Transmission) may have conducted work with respect to an industrial right-of-way perspective (rail, transmission lines, etc.) in the Demoiselle Creek and North River watersheds. These companies may have used triclopyr as Garlon 4 (PCP 21053), Karmax (PCP 21252) and any of the aforementioned glyphosate products.

Private growers must be individually certified (hold a valid pesticide applicator certificate) but do not report their usage. Likewise, vendors must report total sales but do not provide a breakdown relevant to individual purchasers. It is difficult to find information of individual grower or vendor pesticide or herbicide use.

Oil and Natural Gas lease rights within the North River watershed are currently registered both Corridor Resources Inc. and SWN Resources Inc. (Government of New Brunswick 2015).  Corridor Resources is a Canadian energy company. Its lease extends up into the North River watershed to a point just downstream of Wheaton Settlement.   SWN is a wholly owned subsidiary of Southwestern Energy Company in the US (SWN 2015).  Its lease begins where Corridor Resource’s ends, and includes essentially the entire North River watershed upstream of Wheaton Settlement. Seismic testing by SWN in New Brunswick on Mi’kmaq traditional lands north of Moncton was halted following protests that became violent in 2013 and attracted national media attention.  On March 17th 2015 SWN received an extension on its licenses which were due to expire (Canadian Broadcasting Corporation 2015). The former Provincial government made a clear commitment to promoting shale gas development in New Brunswick (Alward 2014). However, shortly after coming into office, the new government enacted a moratorium on expansion (Canadian Broadcasting Corporation 2014). If wells are eventually drilled in the North River watershed, impacts will include freshwater extraction from streams, habitat destruction and sedimentation during road building, and the potential for wastewater spills contaminating surface waters.