Several species of wildlife that warrant specific attention occur in the Little River watershed: Atlantic salmon, American eels, and wood turtles. Of these, the locations of documented encounters with salmon and eels are presented in (Figure 2-6).  Due to their small home range, encounters with wood turtles are considered to be sensitive information, and so are being withheld here.  Atlantic salmon (Salmo salar) Inner Bay of Fundy (iBoF) populations were listed as endangered under the Species at Risk Act in 2003 (DFO, 2010; SARA Registry, 2013a), and the species is considered to be extirpated from the Petitcodiac River system, except for those introduced in stocking programs (AMEC, 2005). 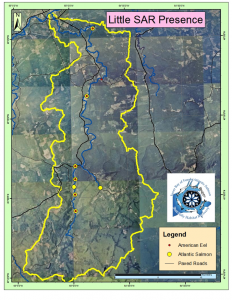 Figure 2-6: Locations of Atlantic salmon and American eels within the Little River watershed.

American eels (Anguilla rostrata) were designated as “Special Concern” by COSEWIC in 2006 (COSEWIC, 2006).  Their status was re-examined and raised to “Threatened” in May 2012 (COSEWIC, 2014). This species is being considered for listing under the federal Species at Risk Act, but currently it has no status (SARA Registry, 2013b). Wood turtles (Glyptemys insculpta) were designated as “Special Concern” by COSEWIC in 1996 which was raised to “Threatened” in 2007 (COSEWIC 2007; COSEWIC 2011). This species is listed as “threatened” under the Species at Risk Act (SARA Registry, 2012).  Guidelines for projects in areas with these species are in Appendix A.

The decline in numbers of iBoF salmon is a marked contrast to the abundance described by early settlers, particularly given McLeod’s (1973) conclusion that the Coverdale (Little) River produced the majority of the smolts in the Petitcodiac system from the early 1800s up to the 1970s.  Though numbers of this species had been decreasing for some time (Elson 1962) construction of the Moncton to Riverview causeway in 1968 eliminated fish passage for adult salmon and smolts altogether and essentially (but for ongoing intervention) extirpated the species from a river system that represented 20% of the iBoF population (Locke, et al. 2003).

Adult iBoF Atlantic Salmon deemed surplus from the Mactaquac Live Gene Bank were released at two locations on the Little River during the fall of each of 2012, 2013, and 2014, timed to encourage spawning. Of these releases the most significant in terms of numbers of fish and proportion of females was the 2012 release. Redd surveys following the releases in 2012 indicated that spawning took place.  Electrofishing in 2013 at six sites along the river (Figure 2-6) detected 72 young of the year coming out of those redds.  Most were still fry sized, though at least five had reached 5 parr size their first summer, probably due in part to lack of competition.  In 2014 three additional electrofishing sites were added increasing the number sampled to nine, at which were found a total of 3 salmon fry and 46 parr.  Finding fewer fry in 2014 was not surprising given the smaller number of ripe females released in the fall of 2013.  The increase in proportion of parr meanwhile likely reflects the additional time the cohort spawned by the 2012 release had had to grow.  No salmon were caught at one of the new sites, which is why only eight points with salmon appear in Figure 2-6. In May and June of 2015 smolts produced on the Little River as a result of the 2012 adult release will be migrating out to sea.  Due to lack of a good site for the smolt wheel on the Little River, it will remain in use on the Pollett River, and instead fyke nets will be used trap and quantify smolts on the Little River.  These will also be injected with PIT tags and retained for sea cage rearing with the eventual goal of returning them to the river as adults in the fall of 2016.

American eels were encountered at six sites while electrofishing (Figure 2-6).  Since eels were not the target of the electrofishing effort (which was sampling salmon) their presence or absence was not specifically quantified or at these locations. However, they were present more often than not.  In the decades that the causeway gates were closed on the Petitcodiac, eels had more success than salmon did navigating the fishway and accessing the upper reaches of the river, such as the Little. In fact they were deemed to be one of the dominant species in the headpond (Locke et al. 2000), and the most abundant resident species upstream of it (Flanagan 2001).  Being catadromous, the eel population was less vulnerable as they are not as dependent upon accessing any given river.  Their spawning takes place in the Sargasso Sea, so young eels already arrive at and reside in different rivers than those in which their parents had lived (COSEWIC, 2006).  This allowed for a steady stream of incoming eels, despite the causeway.

The following is taken from the report prepared by Parish Geomorphic based upon the rapid geomorphic assessments (RGAs) and rapid site assessments (RSATs)  Fort Folly Habitat Recovery conducted in 2012.

Data collected from the Rapid Geomorphic Assessment (RGA) and Rapid Stream Assessment Technique (RSAT) were used to evaluate the geomorphic condition and stability of the assessed reaches of the Little River. In order to interpret the geomorphic data, the included maps of the watercourse are highlighted according to reach stability and dominant geomorphic processes.

The RSAT provides a qualitative assessment of the overall health and functions of a reach in order to provide a quick assessment of stream conditions and the identification of restoration needs on a watershed scale. This system integrates visual estimates of channel conditions and numerical scoring of stream parameters using six categories:

Once a parameter has been assigned a score, all scores are totaled to produce an overall channel health rating that is based on a 50 point scoring system, divided into three classes:

Figure 2-7 outlines the RSAT classes of the reaches assessed in the Little River Watershed. The vast majority of reaches were scored in the ‘Moderate’ class range (88%). 11% of the assessed reaches scored a RSAT class within the ‘High’ class range indicating the system is in excellent condition. Channel reaches classified as ‘High’ were predominantly located on the Prosser Brook system (PB1 – PB13), upstream of the confluence with the Little River (Figure 2-8). These reaches are characterized by well vegetated banks with excellent riparian conditions. The substrate is composed primarily of cobbles and gravels, with some sand in pools. Exposed bedrock was noted in the upper portions of the system as well. On the other hand, a single reach (LR-83) received an RSAT score within the ‘Low’ RSAT class range suggesting the site exhibits poor channel conditions. This reach was located in the lower portion of the Little River system where the channel enters active cattle pasture with trees removed from the banks (Figure 2-9). The trampling of soil and grazing of vegetation along the top of banks minimizes the stability of the channel banks leading to excess erosion and sediment discharge (Figure 2-10). In addition, the excessive organic input from cattle likely contributes to poor water quality, minimizing the suitability for aquatic species. Lack of vegetation along the banks further reduces available habitat for aquatic species and contributes to increased water temperature levels. The quality of the riparian conditions and the surrounding land-use appear to have severally impacted this reach which is expected to remain in poor condition unless improvements are made. 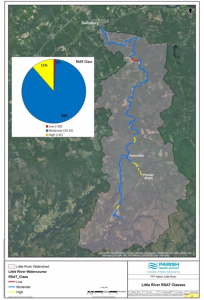 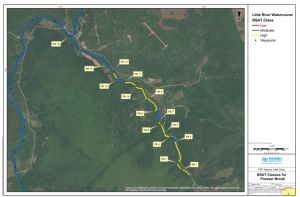 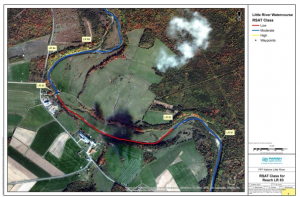 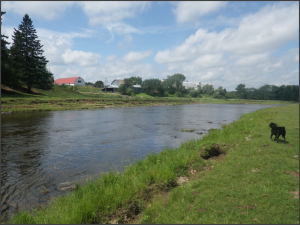 Figure 2-10: Photo of active cattle pasture along floodplain of LR 83

The RGA is used to quantify channel stability based on the presence and (or) absence of key indicators of channel adjustment (Parish Geomorphic Ltd.  2003) with respect to four categories: 1) Aggradation, 2) Degradation, 3) Channel Widening, and 4) Planimetric Form Adjustment. Each indicator has been described in detail below.

Channel aggradation may occur when the sediment load to a river increases (due to natural processes or human activities) and it lacks the capacity to carry it. Piles of sediment in the river can re-direct flows against the banks, leading to erosion and channel widening.

Degradation occurs as the river cuts deeper into the land and decreases its gradient. This can occur from a rapid removal of streambed material due to an increase in discharge, water velocity, or a decrease in sediment supply. Bed lowering can move in both an upstream (as a headcut or nick point) and/or downstream direction. Indicators of degradation include:

Widening typically follows or occurs in conjunction with aggradation or degradation. With aggradation, banks collapse when flows are forced on the outside, and the river starts to widen. Wide, shallow watercourses have a lower capacity to transport sediment and flows continue to concentrate towards the banks. Widening can also be seen with degradation, as it occurs with an increase in flows or decrease in sediment supply. Widening ultimately occurs because the stream bottom materials eventually become more resistant to erosion (harder to move) by the flowing waters than the materials in the stream banks.

These are the changes that can be seen from the air when looking down at the river. The river’s pattern has changed. This can happen because of channel management activities (such as straightening the bends of the river with heavy equipment). Planform changes also occur during floods. When there is no streambank vegetation with roots to hold soil in place, rivers cut new channels in the weak part of the bank during high water. Planform adjustments typically are responses to aggradation, degradation, or widening geomorphic phases.

Upon completion of the field inspection, indicators are tallied for each category to produce an overall reach stability index.  The index classified the channel in one of three stability classes:

The results of the RGA surveys indicate the majority of reaches are in a ‘Transitional or Stressed’ state (65%). These reaches exhibit frequent evidence of instability and are moderately sensitive to altered sediment and flow regimes which will lead to instability. The remaining 35% of the reaches were identified as ‘In Adjustment’ while no sites were found to be ‘In Regime’ (0%). This indicates widespread instability throughout these reaches outside of a natural rate of change. 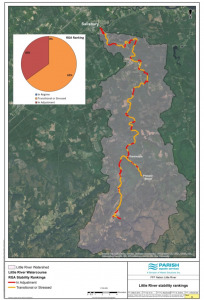 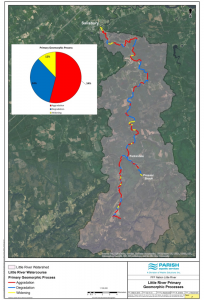 reaches experiencing planform adjustment (Figure 2-12). Channel aggradation appears to occur in the upper and lower portions of the assessed reaches of the watershed whereas degradation is concentrated more centrally. 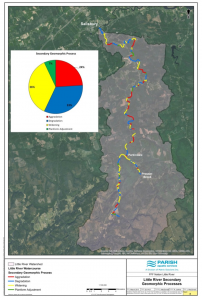 Channel aggradation may occur when there has been a significant decrease in flow, a significant increase in sediment supply, or a significant decrease in slope due to irregular meander migrations. In the lower reaches of the Little River, aggradation is likely a result of increased sediment supply provided by erosion from bank widening and degraded bed material observed towards the middle portion of the assessed reaches. The aggradation observed in the upper reaches may be related to a natural process such as a cyclical high in the hydrology of the watershed or a response to land-use changes. Additional information is necessary to assess the source of sediment in the upper reaches.

Secondary geomorphic processes exhibited greater variability than the primary process of aggradation. Widening (36%) and degradation (33%) represented the most prominent secondary processes throughout the assessed reaches of the watershed. Aggradation was also found to comprise 24% of the assessed reaches, while 7% of the sites experienced planform adjustment as the secondary geomorphic processes. The secondary process of channel widening is expected within the Little River system as this geomorphic process is often seen in conjunction with the primary process of aggradation. When the stream becomes incapable of transporting its sediment load, sediments collect on the stream bed, forming mid-channel bars that concentrate flows into both banks, and lead to a wider channel. Channels also become over-widened due to an increase in flows.