Several species of wildlife that warrant specific attention occur in Pollett watershed: Atlantic salmon, American eels, and wood turtles. Of these, the locations of documented encounters with salmon and eels are presented in (Figure 3-10).  Due to their smaller home range, encounters with wood turtles are considered to be sensitive information, and so are being withheld here.   Atlantic salmon (Salmo salar) Inner Bay of Fundy (iBoF) populations were listed as endangered under the Species at Risk Act in 2003 (DFO, 2010; SARA Registry, 2013a), and the species is considered to be extirpated from the Petitcodiac River system, except for those introduced in stocking programs (AMEC, 2005). 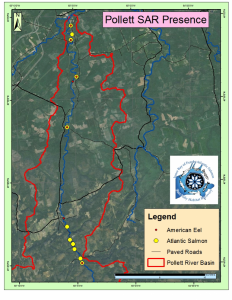 Figure 3-10: Locations of Atlantic salmon and American eels within the Pollett River watershed.

American eels (Anguilla rostrata) were designated as “Special Concern” by COSEWIC in 2006 (COSEWIC, 2006).  Their status was re-examined and raised to “Threatened” in May 2012 (COSEWIC, 2014). This species is being considered for listing under the federal Species at Risk Act, but currently it has no status (SARA Registry, 2013b). Wood turtles (Glyptemys insculpta) were designated as “Special Concern” by COSEWIC in 1996 which was raised to “Threatened” in 2007 (COSEWIC 2007; COSEWIC 2011). This species is listed as “threatened” under the Species at Risk Act (SARA Registry, 2012).  Guidelines for projects in areas with these species are in Appendix A.

The decline in numbers of iBoF salmon is a marked contrast to the abundance described by early settlers.  Though numbers of this species had been decreasing for some time (Elson 1962) construction of the Moncton to Riverview causeway in 1968 eliminated fish passage for adult salmon and smolts and effectively (but for ongoing intervention) extirpated the species from a river system that represented 20% of the total iBoF population (Locke, et al. 2003).

The survival and development of fry released along the Pollett in 2009, 2011 and 2012 were monitored by annual electrofishing at the release sites, and operation of a Rotary Screw Trap (RST) or “smolt wheel” near the mouth of the river during the smolt runs in 2011, 2012, 2013, and 2014 ; with plans for additional work in 2015.  Release sites (Figure 3-10) included locations upstream of Gordon Falls, where quality habitat exists, even though there is some question if salmon would be unable to access it naturally.  The decision was made to use that portion of the river as well since such areas could provide nursery habitat for juveniles (who then migrate out as smolts), despite them possibly being unable to return that far upstream as adults. Electrofishing in 2013 captured 28 salmon parr on the Pollett. The RST was operated 7 days per week that year, from April 30th to June 25th (except for 5 days lost to high water), and caught 172 smolts.   In 2014 only 6 parr were found by electrofishing, which was not surprising as the last release of salmon fry was in 2012. This decline was consistent with lack of natural salmon spawning in the river.  The RST was operated 7 days per week in 2014, from May 8th  to June 9th (except for 1 day due to low water), There were 351 smolts caught during their  downstream migration either in the RST or nearby fyke nets.

American eels were encountered at numerous sites while electrofishing, and in the RST. The RST data has catch, length and weight available; however since eels were not the target of the electrofishing effort (which was sampling salmon) their presence or absence was not  specifically quantified or documented at these locations. However, a reasonable interpretation of the observations is that at most sites they were present more often than not.

In the decades that the causeway gates were closed downstream on the Petitcodiac, eels had more success than salmon did navigating the fishway and accessing the upper reaches of the river, such as the Pollett. Aside from that, being catadromous, instead of anadromous like salmon, made the eel population less vulnerable as they are not as dependent upon accessing any given river.  Their spawning takes place in the Sargasso Sea, and so young eels already arrive at and reside in different rivers than those in which their parents had lived (COSEWIC, 2006).  This allowed for a steady stream of incoming eels, despite the causeway.

Water quality on the Pollett was assessed by the Petitcodiac Watershed Alliance as part of their habitat assessment project in 2009 (Petitcodiac Watershed Alliance 2009).  During the months of July, August and September they measured Dissolved Oxygen (DO), Conductivity (CON), pH, and Temperature (TEMP) at numerous locations within the watershed.  They also maintained a fixed monitoring site near the mouth of the river, a short distance downstream of the site used in subsequent years for the Rotary Screw Trap during the smolt run. Both the basin wide results and those for this monitoring site are presented in Table 3-2.

Across the basin, Dissolved Oxygen readings were taken at 45 different sites and averaged 10 mg/L, which is well within the desired range of 7 to 11 mg/L for streams with cold water fish such as salmon.  Conductivity was measured at 50 different locations during this period, and ranged from a low of 27.8 to a high of 55.3 µS, increasing along a gradient from low values high in the watershed to higher values lower in the watershed.    Temperature readings were taken 48 times, the lowest being 11.2 °C taken one morning in September and the highest being 21.4 °C in the afternoon of a hot day in July.  It is worth noting that the fixed monitoring station got up to 24 °C on day in August. Values for pH were measured 50 times, with little variance. With the exception of the high August temperature recorded at the fixed site, water quality on the river appears to be reasonably good and not a limiting factor for fish.

The following is taken from the report prepared by Parish Geomorphic based on the Rapid Geomorphic Assessment (RGA) and Rapid Stream Assessment (RSAT) data collected by Fort Folly Habitat Recovery on the Pollett River, New Brunswick during the summer of 2013. Figure 3-11 depicts the three main assessed reaches divided by their respective sub‐reach ranges. The total length of watercourse assessed was approximately 57 kilometres (km); the entire Pollett River system drains an area of approximately 314 square kilometres (km2). 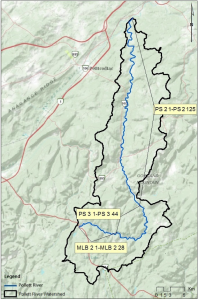 Channel aggradation may occur when the sediment load to a river increases (due to natural processes or human activities) and it lacks the capacity to carry it. Piles of sediment in the river can re‐direct flows against the banks, leading to erosion and channel widening.

Some indicators of aggradation include:

Degradation occurs as the river cuts deeper into the land and decreases its gradient. This can occur from a rapid removal of streambed material due to an increase in discharge, water velocity, or a decrease in sediment supply. Bed lowering can move in both an upstream (as a headcut or nick point) and/or downstream direction.

Indicators of degradation include:

Widening typically follows or occurs in conjunction with aggradation or degradation. With aggradation, banks collapse when flows are forced on the outside, and the river starts to widen.  Wide, shallow watercourses have a lower capacity to transport sediment and flows continue to concentrate towards the banks. Widening can also be seen with degradation, as it occurs with an increase in flows or decrease in sediment supply. Widening ultimately occurs because the stream bottom materials eventually become more resistant to erosion(harder to move) by the flowing waters than the materials in the stream banks.

These are the changes that can be seen from the air when looking down at the river. The river’s pattern has changed. This can happen because of channel management activities (such as straightening the bends of the river with heavy equipment). Planform changes also occur during floods. When there is no streambank vegetation with roots to hold soil in place, rivers cut new channels in the weak part of the bank during high water. Planform adjustments typically are responses to aggradation, degradation, or widening geomorphic phases.

Indicators of planform change include:

The stream geomorphic condition is a key piece of data obtained from the Rapid Geomorphic Assessment. This is based on the degree of departure of the channel from its reference stream type and is evaluated by the magnitude and combination of adjustments underway in the stream channel. Upon completion of the field inspection, indicators were tallied by category and used to calculate an overall reach stability index. There are three stability classes that refer to a relative sensitivity to altered sediment and flow regimes:

In Regime: The channel morphology is within a range of variance for streams of similar hydrographic characteristics – evidence of instability is isolated or associated with normal river meander propagation processes (considered stable or least sensitive).

Transitional or Stressed: Channel morphology is within the range of variance for streams of similar hydrographic characteristics but the evidence of instability is frequent (considered  moderately sensitive).

In Adjustment: Channel morphology is not within the range of variance and evidence of instability is wide spread (considered most sensitive).

The RSAT provides a more qualitative assessment of the overall health and functions of a reach in order to provide a quick assessment of stream conditions and the identification of restoration needs on a watershed scale. This system integrates visual estimates of channel conditions and numerical scoring of stream parameters using six categories:

Once a condition has been assigned a score, these scores are totalled to produce an overall rating that is based on a 50 point scoring system, divided into three classes: 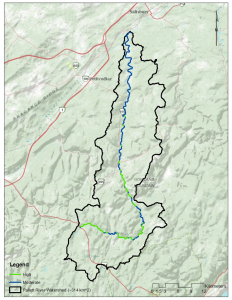