Several species of wildlife that warrant specific attention are found or have been found in the Demoiselle Creek watershed: Atlantic salmon, American eels and Wood turtles.  Atlantic salmon (Salmo salar) Inner Bay of Fundy (iBoF) populations were listed as endangered under the Species at Risk Act in 2003 (DFO 2010; SARA Registry 2013a). American eels (Anguilla rostrata) were designated as “Special Concern” by COSEWIC in 2006 (COSEWIC 2006).  Their status was re-examined and raised to “Threatened” in May 2012 (COSEWIC 2014). This species is being considered for listing under the federal Species at Risk Act, but currently it has no status (SARA Registry 2013b). Wood turtles (Glyptemys insculpta) were designated as “Special Concern” by COSEWIC in 1996 which was raised to “Threatened” in 2007 (COSEWIC 2007; COSEWIC 2011). This species is listed as “threatened” under the Species at Risk Act (SARA Registry 2012). Guidelines for projects in areas with these species are in Appendix A.

The decline in numbers of iBoF salmon basin wide is a marked contrast to the abundance described by early settlers in the area (Dunfield 1991).  Fort Folly Habitat Recovery has not encountered salmon in the course of its field work on the Demoiselle Creek.  Similarly, DFO has no record of recreational catch or historic electrofishing data for it (Gibson et al. 2003).  Demoiselle Creek has received captive reared fry as part of the Live Gene Bank program, and the habitat appears quite capable of supporting them as subsequent electrofishing in 2002 (only one site) by DFO turned up a high density of juvenile fish (Gibson et al. 2003)  However, given the FFHR results, this did not lead to an enduring presence of salmon in the watershed, likely due to the poor rate of adult return to all iBoF rivers, compounded by the aboiteau at the mouth of Demoiselle Creek further decreasing the likelihood of adult return.  Though the current aboiteau was installed in the 1990s, it is just the latest in a series of historic structures in place going back to Acadian settlement, which explains the lack of historic catch data for DFO as salmon have likely been excluded from Demoiselle Creek for quite some time, despite the evident quality of habitat upstream of the aboiteau.  Similarly American eels have not been encountered by Fort Folly Habitat Recovery along the Demoiselle Creek, perhaps due in part to the limited amount of electrofishing done there (three sites in 2012), but more likely due to exclusion by the aboiteau at its mouth.  Wood turtles have not been encountered by FFHR on Demoiselle Creek, though it lies well within their recognized range (Amato et al 2008), and so projects within the watershed should take into account the potential for their presence.

The following is taken from the report prepared by Parish Geomorphic based upon the rapid geomorphic assessments (RGAs) and rapid site assessments (RSATs)  Fort Folly Habitat Recovery conducted in 2012. Demoiselle Creek, which empties into Shepody Bay near Cape Station, was assessed northwest from Route 114 to a point upstream approximately 13 km. This section of creek was divided into two main reaches and 72 sub‐reaches.

The RGA and RSAT data were used to determine the geomorphic condition and stability of the assessed sections of Demoiselle Creek. In order to interpret the geomorphic data, the watercourses are highlighted on their respective maps according to the sub‐reach stability. A bar graph is also associated with each sub‐reach and illustrates the dominant geomorphic process. The geomorphic processes identified included aggradation, degradation, channel widening, and planform adjustment.

Indicators of aggradation include:

The process by which a stream’s gradient becomes less steep, due to the erosion of sediment from the stream bed. Bed lowering can move in both an upstream direction (as a headcut or nick point) and/or downstream. This can occur from a rapid removal of streambed material due to an increase in discharge, water velocity, or a decrease in sediment supply.

Indicators of degradation are:

When the stream becomes incapable of transporting its sediment load, sediments collect on the stream bed, forming mid‐channel bars that concentrate flows into both banks, and lead to a wider channel. Streams that score poorly under channel aggradation may also score poorly for the channel widening parameter. Channels also become over‐widened due to an increase in flows or to a decrease in sediment supply, which is not necessarily related to bed aggradation but may be seen in association with degradation. In these cases widening is the dominant process.

Changes to the planform can be the result of a straightened channel imposed on the river through different channel management activities, or a channel response to other adjustment processes such as aggradation and widening. This migration process will start with degradation if the channel slope is increased or with aggradation if the slope is decreased.

Indicators of planform change are:

A key piece of data obtained from the Rapid Geomorphic Assessment is stream geomorphic condition based on the degree of departure of the channel from its reference stream type, which is evaluated by the magnitude and combination of adjustments that are underway in the stream channel. With respect to stream equilibrium and natural variability, the degree of departure is captured by the following three terms:

In Regime: A stream reach in reference and good condition that is in dynamic equilibrium which may involve localized, insignificant to minimal change to its shape or location while maintaining the fluvial processes and functions of its watershed over time and within the range of natural variability.

In Adjustment: A stream reach in fair condition that has experienced major change in channel form and fluvial processes outside the expected range of natural variability; and may be poised for additional adjustment with future flooding or changes in watershed inputs that could change the stream type.

The assessed reaches on Demoiselle Creek extend 13 km upstream from Rte 114. This section of creek was divided into two main reaches that encompass 72 sub‐reaches. 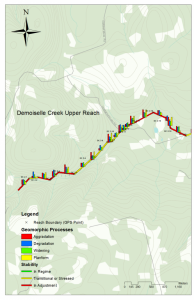 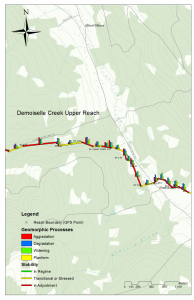 The upper reach of Demoiselle Creek shows evidence of planform adjustment, which is likely related to the channel widening process occurring along 5 sub‐reaches (Figure 1-11). As the streambed widens, the channel can migrate laterally. 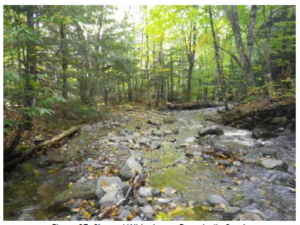 The lower reach of the assessed section of Demoiselle Creek begins just downstream of the confluence with the Albert Mines Road and runs southeast (downstream) approximately 8 km to Rte 114. This reach encompasses sub‐reaches DC 1 – DC 39 (Figure 1-12 and Figure 1-13) 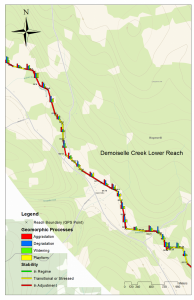 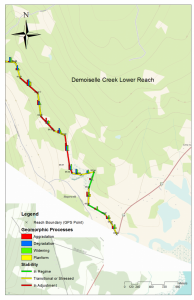 The lower reach of the stream has a lower gradient than the upper reach and it flows through various farmlands. Erosion is occurring along stretches where the vegetation buffer has been removed and turned into farm fields. The result is increased sediment loads and channel widening, which shows that widening is the dominant geomorphic process in the lower portion of the lower reach. An example of erosion and channel widening as the stream flows through farmland is shown in Figure 1-14. 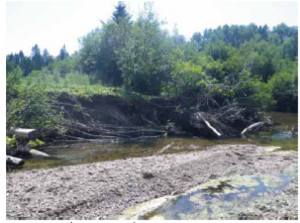