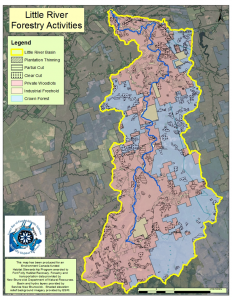 Figure 2-2: Forest Tenure and utilization within the Little River watershed

Maple syrup production remains a significant activity in the area.  In addition to small scale private production there is a large commercial operation, Briggs Maples, tapping over 12,000 sugar maple trees in Albert County on both private and crown land near Fundy National Park (Briggs Maples 2015), with distribution through both Sobeys and CO-OP Atlantic.

Agriculture is the dominant non-forest land use within the Little River watershed (Figure 2-3).  There are two major farms in the watershed (one of which is a dairy farm), as well as numerous hobby farms (Petitcodiac Watershed Alliance 2010). The dairy farm allows its cattle unrestricted 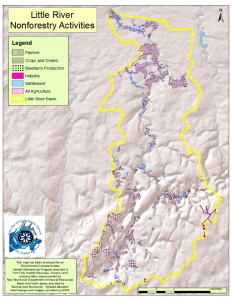 Figure 2-3: Agriculture and other non-forest usages of land in the Little River watershed

access to the river with predictable consequences (Figure 2-10). Row crops and grains predominate across the watershed, representing about 75% of the agricultural activity (Department of Natural Resources 2014).  The rest is divided nearly evenly between blueberry fields 12 % and pastureland 13%.  The blueberry fields are concentrated at higher elevation in the remote upper reaches of the watershed, while pastureland, row crops and grains are distributed throughout at lower elevations along the valley floor, with the latter particularly concentrated  within about a 2 km radius near and below Colpitts Settlement.

A GIS layer of the road network (paved and unpaved) within the Little River watershed was overlaid on the river and its tributaries, to yield Figure 2-4.  There are 52 unpaved crossings 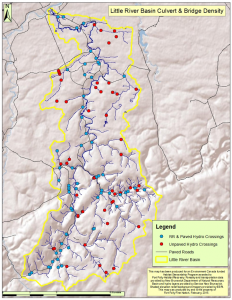 and 63 paved crossings.  For the most part the unpaved crossings are likely to be in the form of culverts, though there could be the occasional bridge as well.  A partial survey of these crossings on the Little River was conducted in 2014, yielding Figure 2-5.  This work was being done along with a survey of water crossings nearby on the Pollett River, which were the primary focus of the 2014 season (Petitcodiac Watershed Alliance 2015). 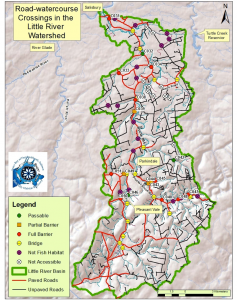 Of the 115 crossings in the Little River watershed identified in Figure 2-5, there was an attempt in 2014 to locate 59 of them (51% of the total), primarily in the lower reaches of the watershed.  Some (11) of these were not found (19% of those searched for), possibly due to limited access caused by equipment constraints (lack of ATV), or because of issues with accuracy of the road layer of GIS data. These were listed as “Not Accessible”.

One of those deemed a full barrier to fish passage, culvert C051, was remediated through construction of a vortex rock weir below it to increase the height of the existing plunge pool (Petitcodiac Watershed Alliance 2015).  This culvert is located where Route 895 crosses Mitton Brook just west of Parkindale near the divide between the Little River watershed and the Pollett (Figure 2-5). Doing so opened up approximately 2.5 km of upstream habitat to brook trout and other species. Further discussion of this action, as well potential for other remediation projects will be discussed in the Fourth Level of Assessment Aquatic Habitat Rehabilitation Plan, under the heading Opportunities for Future Restoration Activities.

While the New Brunswick Department of Transportation (DoT) is responsible for bridges and culverts on the public paved roads, they are not responsible for the vast majority of culverts on unpaved roads which are likely to be on either private woodlots, industrial freehold, or crown land.  If a problem culvert is identified and there is a question of who is responsible (private landowner versus DoT), using GPS coordinates responsibility will be confirmed through further discussions with the Department of Transportation.

Rail service on the section of track from Albert to Hillsborough was closed in 1955 (New Brunswick Railway Museum 2015a).  The Salisbury to Hillsborough portion of the line remained profitable until 1981 when the gypsum plant in Hillsborough closed.  Shortly thereafter, in 1982, Canadian National abandoned the line.  As with service to Albert, rail service from Petitcodiac to Elgin was ended in 1955, and the line abandoned.

In 1968, 22 kilometers downstream of the Little River, along the main stem of the Petitcodiac, the Moncton to Riverview Causeway was built instead of a bridge, in order to accommodate vehicular traffic between the two cities.  The fishway built into it proved to be ineffective. The causeway gates created a barrier to fish passage with significant consequences for native fish species in the river, and led to the decline in the populations of species such as alewife, blueback herring, rainbow smelt, and sea-run brook trout.  Some species disappeared altogether from the upland reaches of the Petitcodiac (such as the Little), including Atlantic tomcod, American shad, and striped bass (Locke, et al. 2003).  Atlantic salmon only remained present in the river as a consequence of ongoing stocking efforts (AMEC 2005)

In April 2010 the Moncton to Riverview Causeway gates were opened as part of the Petitcodiac River restoration project.  Five years of monitoring from 2010 to 2014 following the restoration of fish passage (Redfield 2015) found American shad, striped bass, and Atlantic tomcod returning to the river. Of these, the latter two have shown sustained and progressive increases in numbers over the years, while invasive non-native smallmouth bass have declined.  Consequently it is clear from these results that the fish community of the Petitcodiac has the capacity to recover, given the right conditions, and appears to be on its way to doing so.

Based on general information provided by Service New Brunswick, two forestry operators (JD Irving as Forest Patrol and Natural Resources) may have conducted work in the Little River watershed.  While intended blocks of land to be treated were identified by operators that does not necessarily mean that they were treated with herbicides. Products used in these industries may contain the active ingredient glyphosate.  Glyphosate is found in several formulations under the trade names Arsenal (PCP 23713), Forza (PCP 26401), Vantage (PCP 26884), Vision (PCP 19899) and Vision Max (PCP 27736).  The active ingredient triclopyr has also been used in the past as Release (PCP 22093).

In addition, two industrial operators (Asplundh and NB Power Transmission) may have conducted work with respect to an industrial right-of way perspective (transmission lines) in the Little River watershed.  These companies may have used tricoplyr as Garlon 4 (PCP 21053), Karmax (PCP 21252) and any of the aforementioned glyphosate products.

Oil and Natural Gas lease rights within the Little River watershed are currently registered to both Corridor Resources Inc. and Petroworth Resources Inc. (Government of New Brunswick 2015).  Unlike the Pollett, where most of the watershed has been leased out exclusively to Corridor Resources (which has already drilled several wells), only a small portion of the Little River around Parkindale and Prosser Brook are subject to leases, held primarily by Petroworth. Considering that this is the area that was noted for bituminous shale by Bailey (1865), interest today in hydrocarbons in that portion of the watershed is not surprising.  In July 2013 Petroworth Resources Inc. changed its name to First Sahara Energy Inc. (Marketwired.com 2013).  Then in December 2014 First Sahara Energy Inc. changed its name again to M Pharmaceutical Inc. and announced its intention to pursue interests in pharmaceuticals and biomedical devices (Marketwired.com 2014).  As a consequence it is unclear how serious this company is about developing its lease, though apparently less so than Corridor Resources.

Large areas of privately owned land along the Little River have been developed into homes or cottages, leaving little or no buffer in the riparian zone in order to obtain clear views of the river (Petitcodiac Watershed Alliance 2010).  Such properties are also a potential source of sewage contamination as rural septic systems are not always properly maintained. Several sites were noted where homeowners had pipes discharging directly into the river.

A portion of the Kent Hills Wind farm lies in the southeastern corner of the Little River Watershed (Figure 2-3), noticeable as the road network linking the turbine pads forms a web of industrial land use lines.  Kent Hills was the first wind facility developed in New Brunswick, constructed in two phases in 2008 and 2010 (TansAlta 2015).  Turbines installed during both Phase I and Phase II lie within the Little River watershed on leased crown land near Prosser Brook (TransAlta 2009; Natural Forces Technologies 2015). Altogether the entire project consists of 50 3 MW Vestas V-90 turbines and is the largest windfarm in the province, with a total capacity of 150 MW (The Maritimes Energy Association 2015).  NB Power has a 25 year agreement to purchase the energy produced from TransAlta (83% interest) and their local partner Natural Forces Technologies Inc. (17% interest), which is estimated to be enough to power approximately 26,000 New Brunswick homes (NB Power 2015).