Forest tenure within the Anagance River watershed today is a mixture of private woodlots, industrial freehold, and crown land, which are subject to varying levels of management in terms of harvesting planting and thinning (Department of Natural Resources in 2014). The watershed (Figure 4) covers 138.87 km², of which private woodlots are: 58.42 km² (42.31%), Crown forests: 0.81 km² (0.59%), Industrial freehold leases: 79.64 km² (57.69%).   Considering that 99% of the Anagance is forested, that translates to 57.35% of the basin being industrial freehold (J.D. Irving), the greatest proportion of any tributary in industrial hands.  Industrial freehold in other tributaries rank in descending order as follows: Pollett 25.84%; North 12.77%; Demoiselle Creek 9.63%; Little 0.93%.

Hayward Brook and Holmes Brook drain much of the Industrial Freehold south of Highway 1 in the eastern portion of the watershed.  These have been the focus of numerous studies by Environment Canada  and J.D. Irving in collaboration with the Fundy Model Forest,  L’Université de Moncton, and the University of New Brunswick to gauge the effects of forestry on aquatic ecosystems (Chaisson 1996; Pugh 1999; Pomeroy 2002). 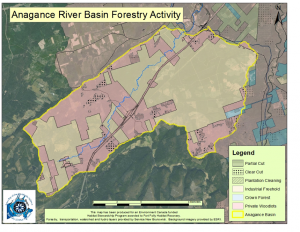 Figure 4: Forest tenure and management in the Anagance River watershed

Today the Anagance watershed is sparsely populated with little agricultural development.  Though minor (1% of the watershed), agriculture is the dominant non-forest land use within the Anagance River watershed (Department of Natural Resources in 2014). Of the 1.59 km2 of land being used agriculturally today, pastures account for 1.25 km2 (79%) of it; and grains were the remaining 0.33 km2 (21%). These are located either near settled areas such as the Village of Petitcodiac, Anagance, or near the ridge dividing between the Anagance and Jordan Brook (Kennebecasis). There are no cultivated blueberry fields within the watershed, which is somewhat unusual given how common these are within other Petitcodiac tributaries. 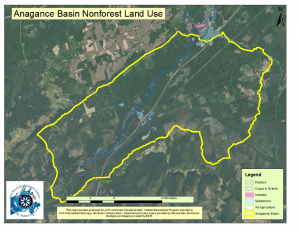 A GIS layer of the road network (paved and unpaved) within the Anagance watershed was overlaid on the river and its tributaries, to yield Figure 6.  There are 41 unpaved crossings and 30 paved crossings.  For the most part the unpaved crossings are likely to be in the form of culverts, though there could be the occasional bridge as well.  As part of its Broken Brooks project, the Petitcodiac Watershed Alliance (Johnston et al 2017) assessed 6 Anagance watershed culverts, and identified one bridge during the 2016 field season.  Their focus that year was on the North River, but these were easily accessible locations (primarily along Highway 1) passed in the process of traveling to other sites. Of the culverts surveyed, they found: two that allowed fish passage, three that were partial barriers to passage (due to debris and excessive outflow drops); and one that was a full barrier to fish passage.  That accounts for approximately 10% of the crossings identified in Figure 6. Plans for 2017 are to move on to the Memramcook River watershed.  However, it is reasonable to assume that at some point as part of their ongoing Broken Brooks culvert assessment program, the PWA will do additional surveys within the Anagance, to assess condition, identify barriers to fish passage, and if needed, undertake or recommend remediation options. 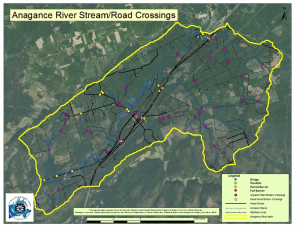 In 1968, approximately 40 kilometers downstream of the North River, along the main stem of the Petitcodiac, the Moncton to Riverview Causeway was built instead of a bridge, to accommodate vehicular traffic between the two cities.  The fishway built into it proved to be ineffective. The causeway gates created a barrier to fish passage with significant consequences for native fish species in the river, and led to the decline in the populations of species such as alewife, blueback herring, rainbow smelt, and sea-run brook trout.  Some species disappeared altogether from the upland reaches of the Petitcodiac (such as the North), including Atlantic tomcod, American shad, and striped bass (Locke, et al. 2003).  Atlantic salmon only remained present in the river as a consequence of ongoing stocking efforts (AMEC 2005)

In April 2010 the Moncton to Riverview Causeway gates were opened as part of the Petitcodiac River restoration project.  Seven years of monitoring from 2010 to 2016 following the restoration of fish passage (Redfield 2017) found American shad, striped bass, and Atlantic tomcod returning to the river. Of these, the latter two have shown sustained and progressive increases in numbers over the years, while invasive non-native smallmouth bass have declined.  Consequently, it is clear from these results that the fish community of the Petitcodiac has the capacity to recover, given the right conditions, and appears to be on its way to doing so.

Based on general information provided by Service New Brunswick, two forestry operators (JD Irving as Forest Patrol and Natural Resources) may have conducted work in the Anagance River watershed.  While intended blocks of land to be treated were identified by operators that does not necessarily mean that they were treated with herbicides. Products used in these industries may contain the active ingredient glyphosate.  Glyphosate is found in several formulations under the trade names Arsenal (PCP 23713), Forza (PCP 26401), Vantage (PCP 26884), Vision (PCP 19899) and Vision Max (PCP 27736).  The active ingredient triclopyr has also been used in the past as Release (PCP 22093).

In addition, two industrial operators (Asplundh and NB Power Transmission) may have conducted work with respect to an industrial right-of way perspective (transmission lines) in the Anagance River watershed.  These companies may have used tricoplyr as Garlon 4 (PCP 21053), Karmax (PCP 21252) and any of the aforementioned glyphosate products.

Oil and Natural Gas lease rights within the Anagance River watershed are currently registered to Corridor Resources Inc. (Government of New Brunswick 2017).  Corridor Resources is a Canadian energy company (Corridor Resources 2001). Its lease covers only a small portion of the southwest end of the watershed near Dunsinane.  A short distance to the north of the Anagance watershed, SWN Resources Inc. hold lease rights on portions of both the North River, and the Kennebecasis River watersheds. SWN is a wholly owned subsidiary of Southwestern Energy Company in the US (SWN 2015), but it is unlikely that operations outside the watershed would have much impact on the Anagance.  Seismic testing by SWN in New Brunswick on Mi’kmaq traditional lands north of Moncton was halted following protests that became violent in 2013 and attracted national media attention.  On March 17th 2015 SWN received an extension on its licenses which were due to expire (Canadian Broadcasting Corporation 2015). The former Provincial government made a clear commitment to promoting shale gas development in New Brunswick (Alward 2014). However, shortly after coming into office, the new government enacted a moratorium on expansion (Canadian Broadcasting Corporation 2014). Corridor Resources has been actively developing wells nearby (McCully Field) in parts of their lease located on the Kennebecasis River near Penobsquis (AMEC 2014), so drilling within the Anagance watershed is a distinct possibility. If wells are eventually drilled near Dunsinane, potential impacts will include freshwater extraction from streams, habitat destruction and sedimentation during road building, and the potential for wastewater spills contaminating surface waters.   Though the Corridor Resources lease covers only a small portion of the watershed, it is worth noting that since that area is located in the headwaters, any impact on surface water from well sites operating on that lease, would have consequences for much of the watershed downstream.

The unusually large (compared to other Petitcodiac tributaries) proportion of industrial freehold forest (57.69%) in the Anagance watershed today is likely more a consequence of the low population within the watershed, than it is a direct cause of it. The bulk of what remains is private woodlots (42.31%), which is the lowest of any of the watersheds examined, while Crown Land is almost absent (0.58%).  These forests account for 98% of the watershed, while agriculture and settlement combined are about 2%. In comparison for the two adjacent watersheds the combined proportions for agriculture and settlement are as follows: North River 32%; and the Pollett River 6% (Department of Natural Resources in 2014).

There has been limited population growth in the Anagance compared to other portions of the Petitcodiac.  Much of the watershed lies within Cardwell Parish, though the boundaries of the two are not an exact match. The 2016 census reported 1,353 people in Cardwell Parish (StatsCan 2017) spread across 311.9 km2, a density of about 4.3 people per km2.  By comparison, tallying up the population centres in 1871, there were approximately 650 people (Provincial Archives of New Brunswick 2017), a density of perhaps 2.1 people per km2, suggesting that the population of Cardwell Parish may have roughly doubled over the last 150 or so years.  Its immediate neighbor, Salisbury Parish (once the Villages of Petitcodiac, and Salisbury are included) is almost twice as densely populated today (7.8 people per km2). While this is less than the average population density in New Brunswick in 2016 of 10.5 persons per km2 (StatsCan 2017), both parishes have developed beyond the Province’s average population density of 3.9 persons per km2 in 1871.

This difference in population density between the Anagance and other Petitcodiac tributaries is significant because, addition to clearing for agriculture, large areas of privately owned land on the North, Pollett and Little River watersheds have been developed into homes, or cottages, leaving little or no buffer in the riparian zone to provide residents with clear views of the river (Petitcodiac Watershed Alliance 2010).  Such properties are also a potential source of sewage contamination as rural septic systems are not always properly maintained. Several sites were noted where homeowners had pipes discharging directly into the river.  With few private dwellings scattered throughout the watershed these impacts are less common on the Anagance (Petitcodiac Watershed Alliance 2016).  That said however, the watershed is far from pristine, as infringements on riparian buffers caused by forestry (recent clear cuts), the rail corridor, and transmission lines are common (Pugh 1999).

Several locations are displayed in purple on Figure 7 as industrial land use.  Review of satellite images indicates that all four of these are gravel pits with no associated buildings, or permanent infrastructure other than road access. Similarly, the topographic map for the area (Natural Resources Canada 1997) shows clearings where the two sites east of the Village of Anagance are located, but does not indicate any permanent infrastructure or activity.   The two sites west of Anagance do not show up as cleared areas, and again, there is no infrastructure present.  At least one of these sites looks as if it may not be currently active. Given the proximity of all of four sites to Highway 1, it is likely that these supplied material during its construction, and may see only intermittent use now. 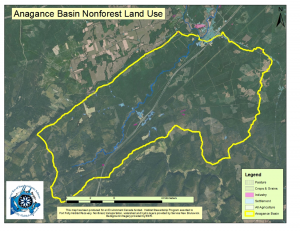