The Pollett River flows from Albert County into Westmorland County. It is the largest tributary in the Petitcodiac River watershed, with a basin that covers 314 square kilometers.  Its headwaters surround Mechanic Lake near Fundy National Park in New Brunswick’s Central Uplands Ecoregion (New Brunswick Department of Natural Resources 2007).  From there, the 57 kilometer long river passes through Elgin in the Continental Lowlands Ecoregion and on to its mouth along the Petitcodiac, near Salisbury in the Eastern Lowlands Ecoregion, a short distance above the head of tide.  From its top to the confluence with the Petitcodiac, the Pollett drops approximately 335 metres in elevation. 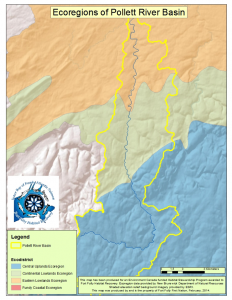 In addition to its main stem, named tributaries of the Pollett River include: Barchard Brook; Bustin Brook; Campbell Brook; Colpitts Brook; Dry Brook; Grassy Lake Brook; Gibson Brook; Haslam Brook; Kelley Brook; Lee Brook; Mapleton Brook; McMain Brook; Mechanic Lake Brook; Miller Brook; Pinnacle Brook; Popple Intervale Brook; Shaffer Brook; Steeves Brook; and Webster Brook. The river usually runs clear, and often has a gravel bottom though in places bedrock is visible.  During the spring freshet or after a storm it can become turbid for several days, before resuming its more normal condition.  Rises of up to 1 metre can occur in the spring and fall, and surges of 2 to 3 metres have occurred in as little as 12 hours (Elson 1962).

In its upper reaches the Pollett flows through a steep valley covered with mixed conifer and deciduous forest and is separated from the lower reaches by a deep gorge over a kilometer long.  Gordon Falls (Figure 2) located near the midpoint along the gorge, drops 4.5 to 6 meters depending upon the level of flow in the river. Below the gorge from Elgin to its mouth the river is fairly consistent, with a gradient of about 3 meters per kilometer.  It forms a series of shallow pools that alternate with long gentle rapids, flowing through stretches of forest broken up occasionally by scattered farmland and camps, that become increasingly frequent the closer to the mouth one gets. 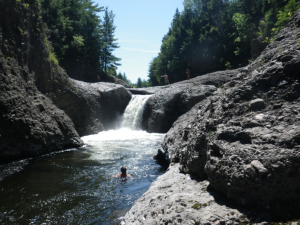 The dominant land uses are forestry and agriculture. Approximately 90% of the watershed is forested, 48.3% of which is on small private woodlots, 26% is on crown land, and 25.6% is industrial freehold forest land owned by J.D. Irving.  Though there is some fragmentation, 22% of the forest is considered mature (University of New Brunswick 2014). Approximately 5 % of the watershed has been cleared for agriculture, 59% of which is being used to grow row crops or grains, 22% pasture or hay, and 18% blueberries.