This document presents information assembled to enable planning of restoration activities  within four watersheds: 1) Demoiselle Creek, a small watershed that drains directly into Shepody Bay, near the mouth of the Petitcodiac River estuary, and three tributaries of the Petitcodiac River system: 2) Little River, 3) Pollett River, and 4) North River.  The location of these four watersheds in or near the Petitcodiac system, (just outside of Moncton New Brunswick) is presented below in Figure 1. Each watershed was assessed according to the four level approach laid out in the Department of Fisheries and Oceans document, “Ecological Restoration of Degraded Aquatic Habitats: A Watershed Approach” (DFO 2006).  Under this process the first level of assessment is an examination of the land use history of the watershed.  The second level of assessment looks at the current impacts.  The third level of assessment considers the aquatic and riparian habitat, and the fourth level of assessment then brings this information together to develop an aquatic habitat rehabilitation plan that identifies priorities and opportunities for interventions within each watershed to advance the goal of habitat restoration. 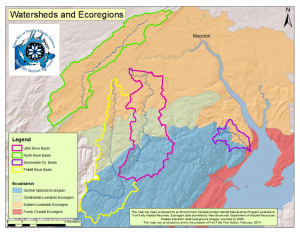 The Little River (also referred to as the Coverdale River), flows for its entirety in Albert County before emptying into the Petitcodiac River (which marks the boundary with Westmorland County).  The Little River is, despite its name, the second largest tributary in the Petitcodiac watershed (after the Pollett River), draining a basin of 276 square kilometers.  Its headwaters are at the base of Gowland Mountain in New Brunswick’s Central Uplands Ecoregion (New Brunswick Department of Natural Resources 2007) a few kilometers southeast of Elgin (Figure 2-1).  From there the river flows 51 km north through the communities of Parkindale in the Continental Lowlands Ecoregion, on through Colpitts Settlement in the Eastern Lowlands Ecoregion, ending finally at Salisbury where it joins the main stem of the Petitcodiac River near the head of tide. 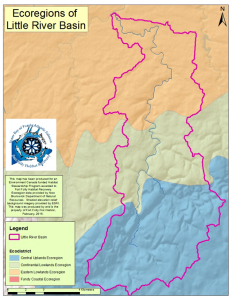 Along the way the Little River drops nearly 200 m in elevation between its headwaters and its mouth. In addition to its main stem, named tributaries of the Little River include: Bull Creek; East Branch Little River; Ferndale Brook; Hopper Brook; Leaman Brook; Mitton Brook; Pow Brook; Prosser Brook; Stiles Brook; and Upham Brook.  The river usually runs clear, and often has a gravel bottom though in places bedrock is visible.  During the spring freshet or after a storm it can become turbid for several days, before resuming its more normal condition.

Government maps today label it as the Little River (Natural Resources Canada, 2010), though the Department of Fisheries and Oceans produced documents referring to it as the Coverdale River as recently as the mid-1980s (Ashfield et al 1984), and when speaking with the general public, both names are still frequently encountered. For much of its history since English settlement the river was known as the Coverdale River,  from which Coverdale Parish took its name when it was split off from  Hillsborough Parish in 1828 (Provincial Archives of New Brunswick 2015).  The name, Little River, is not distinctive, and should not be confused with several other rivers in New Brunswick bearing the same name: one of which is a tributary of the upper Saint John River in northwestern New Brunswick near Grand Falls; another of which flows into Indian Lake before that drains into Grand Lake and eventually the Saint John River at Jemseg; and yet another which lies within the city limits of Saint John, and flows directly into Saint John Harbour.  The situation has improved somewhat however, as Ganong (1896) noted the name “Little River”, in use for 7 other rivers within the Province, though not this one, which he referred to as the Coverdale River.

The name Coverdale remains part of the modern landscape in the nearby localities of Upper Coverdale, Coverdale, and Middle Coverdale spread out along the main stem of the Petitcodiac towards Riverview, as well as Lower Coverdale, downstream between Riverview and Hillsborough.  Riverview itself is the result of the amalgamation in 1974 of several communities including Coverdale (Hamilton 1996). Ganong (1896) noted usage of the name Coverdale in reference to the river on a land grant dating from 1788, though he indicated that the origin was unknown to him.  Interestingly he also pointed out that an 1889 Postal map referred to it as the Scadouck River by mistake, an error which was also repeated 6 years later in the Electoral Atlas of the Dominion of Canada 1895 (Library and Archives Canada 2015). This usage presumably should have been applied to the nearby Scadouc River, which flows into the Northumberland Strait at Shediac. Baillie’s (1832) An Account of the Province of New Brunswick… with advice for emigrants; Perley’s (1857) Handbook of Information for Immigrants to New Brunswick; Walling’s (1862) Topographical Map of Westmoreland and Albert Counties; and the Roe Brothers 1878 Atlas of the Maritime Provinces (Dawson 2005), all confirm Ganong’s (1896) statement that Coverdale was the official name in use for the Little River at that time.  That said, there still appears to have been some ambiguity and dual name usage even then, as in 1889 a complaint was registered with the Provincial Legislature over the state of the John Mitton Bridge, described  as  “crossing the Little River a few miles from Salisbury Station, in Coverdale Parish, Albert County” (New Brunswick House of Assembly 1890).

Two theories exist about where the name Coverdale itself came from (Kanner and Geldart 1984).  One is that it was a tribute to Myles Coverdale, a British Bishop in 16th century England who produced the first translation of the Bible from Latin to English. The other suggests that it comes from the first English settlers at the mouth of the river, Joshua Geldart and his nephew John who arrived in May 1774, both of who were born in Coverham in the Dale of Cover in Yorkshire (also near where Myles Coverdale was born, and from which he took his name).  Given Ganong’s (1896) observation that the name Coverdale had been applied to the river as early as 1788, just 14 years after the arrival of the Geldarts, their use of the name in reference to their home in Yorkshire seems the simpler and more persuasive of the two theories. In either case though, it is clear that the name arrived with early English settlers and was contemporary with the arrival of the Geldarts.

Colpitts Settlement was itself known as Little River from 1857 to 1903 (Provincial Archives of New Brunswick, 2015), which is how it was listed by the Electoral Atlas of the Dominion of Canada (1895). In 1904 the community changed its name to Colpitts Settlement in recognition of the Colpitts family, the first English settlers at that location along the river (Provincial Archives of New Brunswick, 2015), and who’s descendants subsequently accounted for much of the early population at that location (Walling 1862).  John Colpitts arrived from England as a teenager with his father (Robert Colpitts, who settled along the Petitcodiac near Salisbury in 1783).  In 1786, John moved off the main stem, up along a tributary (then called the Coverdale River) to develop his own homestead at Little River (Moncton Daily Times, Thursday August 26th 1920; Provincial Archives of New Brunswick, 2015).  This may explain the origin of the name Little River for the river itself today, taken from the prior English name for that settlement along its banks.  That name is also still in use, now referring to a smaller community further upstream between Colpitts Settlement and Parkindale (Natural Resources Canada, 2010).