Results from the RGA and RSAT assessments conducted on Little River indicate that the majority of the reaches were determined to be in a transitional/stressed state while the remaining reaches were classified as in adjustment. In general, the results indicate a watershed responding to change with aggradation as the primary geomorphic process and widening as the secondary process. Therefore, restoration efforts should focus on narrowing of the channel to promote scour of the riverbed.

In general, reaches with excessive sediment accumulation may be restored via in-channel structures including rock vanes, upstream-V log weirs, double tree deflectors, and brush mattresses. These structures are designed to concentrate flows, promote scour pools, and narrow the channel. By narrowing the channel, the stream will regain the capacity to transport sediment as flow velocity will increase. This will encourage the channel to return to a state of dynamic equilibrium whereby sediment accumulation and deposition are in balance with flow discharge. A detailed site survey including longitudinal and cross-sectional profiles, pebble counts and riparian topography is necessary to appropriately identify a restoration strategy for a site.

At the watershed scale, best management practices should be promoted to improve stability of the Little River. Although agricultural land-use constitutes a low proportion of the watershed, much of the existing agricultural land is concentrated along the riparian corridor. Many of the assessed reaches of the Little River were identified as in adjustment and lack adequate riparian conditions due to surrounding agricultural land-use. Shrub and tree planting will provide greater stability and habitat along banks that currently lack cover and will reduce sediment input. This will minimize aggradation experienced in the lower reaches of the Little River. Furthermore, active cattle pasture along the channel should be restricted from access to the river to promote vegetation growth along the riparian corridor and to improve water quality. Any opportunities to reforest the riparian corridor will lower water temperatures, reduce sediment input and runoff, minimize non-point source pollution and improve channel stability.

Summary of Issues Identified from Information on Current Impacts

The 2014 culvert survey noted 4 culverts that were partial barriers and 10 that were full barriers to fish passage (Figure 2-5).  One of the latter, C051 has already been modified through construction of a vortex rock weir, as described below. Plans should be developed to address the remaining 13 culverts where issues are known to exist.

Culvert C051 located where Route 895 intersects Mitton Brook (Figure 2-5) was found to be a full barrier to fish passage during the 2014 culvert survey.  It was identified as a candidate for construction of a rock weir below the outflow.  Culverts that are not properly designed can create a drop, or change in elevation, between the culvert outflow and the stream flowing through it. Culvert C051 has a downstream slope of 3.79% and an outflow drop of 19 cm, potentially blocking approximately 2.5 km of upstream habitat for brook trout and other species. Large changes in elevations between the outflow drop and stream can prevent fish from jumping into the culvert and migrating upstream.

To reduce this barrier, a vortex rock weir design was selected to increase the height of the existing plunge pool. By installing this type of structure water levels are raised in the plunge pool and the barrier outflow drop is effectively eliminated.  The size and volume of the rock weir is based upon the stream and culvert characteristics and can be calculated using data collected from the culvert assessment.

The apex or low flow notch (located at the center of the weir where water can flow during times of lower volume) has the lowest point of elevation and points upstream. The wings of the weirs were built at a 30° angle from the base of the weir (Figure 2-14).

Figure 2-15: Outflow photos of culvert C051 before and after construction of a vortex rock weir downstream.

Over time, the watercourse will naturally deposit material within the rock weir and fortify the structure. Stream-crossing structures should be inspected and maintained on a regular basis, especially following high water flow season and large rainfall events. Installing this rock weir allowed fish access to approximately 2.5 km in length and 6.03 km² of upstream habitat.

There are 67 water crossings in the Little River watershed that have been identified in the GIS layer that have not yet been assessed.  Due to equipment constraints, (need for ATV) 11 of these were not located either because they were deemed inaccessible, or in some cases they may not have been found because they do not exist,  possibly identified in error due to errors  in the road and water layers of the GIS. There was not an attempt in 2014 to locate the other 56. So completion of the survey (with an ATV) would be useful in order to fine tune the list and properly rank priorities.  The state of watercourse buffers along such tributaries ought to be assessed by the same crew at the same time.

In 2014 the work done with culverts on the Little River found 4 that were partial barriers and 10 that were full barriers to fish passage.  Of these, 1 of the full barrier culverts has already been addressed (Figure 2-15) through the work described above.  The remaining 13 should be ranked in order prioritize them (by factors such as complexity of repair (due to either technical or landowner issues), upstream habitat made accessible, etc.).  Then starting with those where action is most practical & beneficial they should be modified as needed to improve passage.

David and Marilyn Mitton have expressed a desire for help with stream bank stabilization in order to protect part of the pasture of their cattle farm, in the community of Meadow on the Little River, downstream  of its confluence of the East Branch Little River,  Figure 2-16. 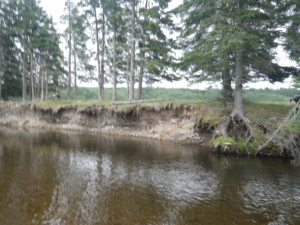 As a source of sediment fairly high up in the system, work at this site has the potential to provide benefits for quite some distance downstream.  The Rapid Stream Assessment Technique (RSAT) rating for overall health and functioning in the river at this location was moderate. The Rapid Geomorphic Assessment (RGA) result for this section was Transitional or Stressed, with Degradation being the primary geomorphic process, and Aggradation being the secondary geomorphic process.

Work at this site will be undertaken in a three phase process. The first (planning) phase in 2015 to 2016 involves further site specific assessment to layout and design a prescriptive plan of how to address the issues occurring there, and the preparation for implementation of that plan (getting permits, finding equipment & operators (if required), lining up planting stock etc.).  Then during 2016 to 2017 the second (project) phase itself will be carried out in terms of earth moving, tree planting etc. as determined during the first phase.  Finally in 2017 to 2018 will be the third (post construction) phase, involving survey, monitoring and maintenance (such as weed control if needed) of the site.  This last phase should also provide opportunities for outreach at the site as neighbouring landowners see what has been done, and imagine how similar projects might benefit their properties.

Once such landowner engagement  has begun, then additional, ambitious in-stream projects such as brush matting, upstream-V log weirs, and double tree deflectors (depending upon the needs  of any given site) may become practical.  This will help address the recommendation coming out of the RGA that restoration efforts should focus on narrowing of the channel to promote scour of the riverbed. When it is time to develop and implement such projects, Melanson et al. (2006) note that interventions must be properly designed by trained individuals spending several days doing a proper layout. Structures not sited properly are unlikely to produce the desired improvements to habitat, instead becoming buried, washed out, or creating worse problems than were present prior to installation.  The presence of threatened and endangered species (salmon, eels, and wood turtles) in the watershed also means that such projects must be planned and implemented with awareness of the vulnerabilities of these species.  Fort Folly Habitat Recovery has developed project checklists (Appendix A) based on species biology to provide guidelines to help avoid or minimize the risk of negative impacts.