Demoiselle Creek is located within Albert County, approximately 40 km southeast of Moncton. It passes under Hwy 114 before emptying in to Shepody Bay. Albert Mines Road follows north along the creek (Figure 1-1). The Demoiselle Creek watershed is 46.00 km2.   The basin drains areas of 3 ecoregions.  Much of the headwaters drain Central Uplands Ecoregion (Department of Natural Resources 2007) the site of historic mining activity for albertite, gypsum and anhydrite.  Other than forestry, blueberry production is the only other commercial activity current in this zone (Department of Natural Resources in 2014).  The creek then passes through the Eastern Lowlands Ecoregion. This area is highly forested and is contains most of the settlement and light industry, and some of the agriculture for the watershed.   Finally, Demoiselle creek enters the Fundy Coastal Ecoregion .  This area is highly agricultural and contains large areas of fertile lands reclaimed by extensive dykes built by early French settlers.  Where the creek enters Shepody Bay, there is an aboiteau, a one way hydro gate that allows fresh creek water to drain into the bay, but restricts the inflow of brackish water at high tide. 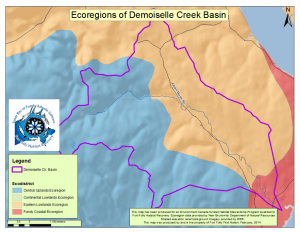 Unfortunately, this also restricts migration of marine animals into the creek. Aboiteaus have been used since the dykes were built in the late 1600s.  The current aboiteau is a modern concrete structure installed in the 1990s, but its design still restricts fish passage from the marine environment into the creek.

The name, Demoiselle, dates back to the time of Acadian settlement (Hamilton 1996). By 1749 it was applied to several features in the area, most notably Hopewell Cape, known then as “cap de Damoiselles” by the French (Ganong 1896), due to the famous Hopewell Rocks, located not far from the mouth of Demoiselle Creek .   The rocks, often described as looking like flower pots by the English , were named a bit more romantically by the French, who thought that they looked like young ladies, i.e.  Damoiselles  (Rayburn 1970).  The mouth of Demoiselle  Creek,  only 1.68 km away from the rocks as the crow flies, is the most significant inlet in the immediate area of the rocks (Natural Resources Canada 2010), which is likely why the name of the rocks became attached to it. In addition to its main stem, named tributaries of Demoiselle Creek include:  Curryville Creek, McHenry Brook, and Wilson Brook.